“All You Gotta Do Is Dance” – Single 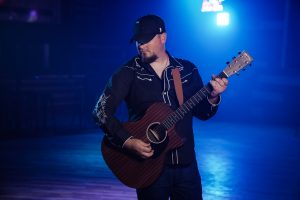 Gavin Lee is characterized by his authentic, nature, and he comes by it naturally.  Gavin spent the majority of his time in the woods growing up.  An avid hunter then and now, his lifeline is the great outdoors.   Gavin picked up the guitar as a teenager and since then, his music has become his true love. Following the country music hit-makers that made waves in the 80s, the self-taught guitarist and traditional country recording artist is dedicated to follow the same footprint of tradition. “I try to make my music relatable to the everyday working man.  That is my ultimate goal for my music.” Having suffered the loss of his Step-dad, Gavin turned to his music as therapy to process his grief.  Over time, his catalog of originals blossomed from sadness to celebrating the “little things” in life.  Gavin used songwriting as a means to cope and heal.

At 25, the country music hopeful moved to Nashville to pursue his dream. The singer/songwriter has since recorded and released seven singles (“Old Chevy,” “Gone Fishin’, ” “Dixie Dreamin’,” “ Millionaire in Mexico,” “Friend With A Beer,” “American Crazy,” “Beginning Of Me and his latest release “All You Gotta Do Is Dance.”  The song titles alone are an appropriate introduction to exactly what listeners can expect to hear. “I’m not trying to follow trends; my music isn’t cookie-cutter.  I write what’s real to me. What you see is what you get. What you hear is who I am as a person and recording artist.”

Characterized by his down-home, hardworking, blue-collar persona, coupled with a genuine heart and endearing smile, Gavin has garnered a welcoming grassroots following.  His true-grit sound is influenced by 90s country artists and the likes of Jason Aldean and Riley Green. Comfortable performing in a bar room, honky tonk or among a crowd of thousands at fairs and festivals, the stage feels like home. Gavin has swiftly become one of the top trending up ‘n comers in the indie country music scene.  An active member of the Music City community, and a member of the Texas Country Music Association, he’s become a staple at various writer’s rounds in Nashville.  Gavin is currently in the studio recording new music with famed producer Bill McDermott (of George Strait, Brett Eldredge, Tim McGraw, Jo Dee Messina, Michael Ray, Martina McBride fame) and is set to release his new single in the fall of 2022.